Learn how to use shutter priority in 15 minutes

You’ve got the new beaut camera or maybe you dusted off an old one that you’ve had for a couple of years and instead of using your smartphone, you thought you would use this for your marketing images. After all you have had enough of searching for stock photos that just aren’t what you need.

After looking at this camera you realise there’s a dial on it that says A, P, S and M and maybe a couple of other items like the picture of a video camera, auto or some other sign that gives you choices to select a genre. But you’ve heard that one of the best ways to shoot is to use “S’. But what is S?

Well it’s Shutter priority. Now to refresh your memory on what the shutter is I’ll send you off to have a quick read of these 2 articles.

Understanding the 3 points of the exposure triangle

So now you’ve done that or at least scanned it. Lets’ go forward

S stands for Shutter – yes, you’ve worked that out. Great!

But unlike Aperture which is a dimension of the hole that allows light in and is measured in f-numbers, it’s actually a speed. So, you are effectively measuring the time it takes to open and close the shutter in front of the sensor.

As with Aperture usually the numbers relate to a stop. However unlike Aperture the range of Shutter speeds is usually much greater so it doesn’t follow that each stop represents twice the preceding value and half the next higher value.

It is arguable that changing the Shutter Speed setting is the best or at least one of the best ways to be creatively in control with the final image that you want.

So why would you want that? Well from a creative control point of view it gives you options.

Have you looked at a what you thought was a good photo close up only to realise that it’s slightly blurred? Well that’s camera shake and in the industry it’s called “soft”.

The first one is noticeably soft. The photographer (that’s me) didn’t have a lot going for him. Not much light, using s telephoto lens and as the subject (the leopard) was moving had no time to compose or even think about the shot.

However, in the above shot I had just enough time to jack up the ISO so that I could get a shutter speed that would freeze the action. Probably still not the best photo of a Leopard but not bad.

So apart from reducing or eliminating Camera Shake what else do we use the shutter speed for?

Well there are 3 main ways to use it:

1 Freezing
That is you freeze action with a fast shutter speed. That could be anything from sports action to facial expressions to droplets of water

2 Blurring
Blurring on the other hand is using a slow shutter speed to blur movement. The most well know “blur” is the cascading of water through rocks or a waterfall. But there are lots of other uses as well such as rain or snowfall, slowing down action found in cycling or surfing. Another example would be transport like trains or cars

3 Panning
To pan or track means you are moving the camera to follow someone or something as they move leaving the background blurred and the subject relatively sharp. This gives the impression that the subject is speeding past the viewer (photographer) 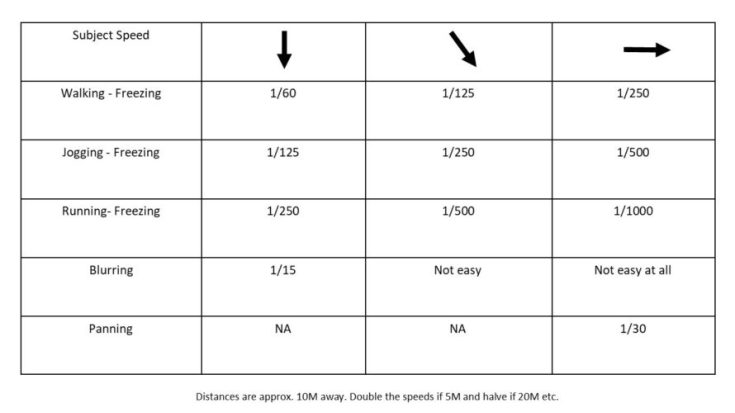 Here’s some exercises to experiment with based on the three main ways mentioned above.
I’ve made the basic assumption that you have access to an outside tap with a hose. If not then use an indoor tap but make sure the area is well lit preferably with natural light.

1 Grab that camera, turn it on and take off the lens cap!

5 If you have a zoom lens make sure it’s between 50mm and 100mm (35mm equivalent) and have it ready to go (so you don’t waste too much water.

6 Turn on the tap

7 Now take at least one shot. This is your freezing exercise

8 Repeat steps 1-7 except you now adjust the shutter speed to 1/15 to blur the water as it comes out of the tap. At that speed it’s preferable to mount the camera on a tripod with a remote shutter release. If you don’t have a remote shutter release, then use your timer. And if you don’t have a tripod use a wall or chair – in other words use your imagination!

9 Finally to get a panning effect you need to:

2 Go outside to the (or any) road. Stay on the footpath or verge.

This last one is a bit tricky so you may need a few goes at it.

After your shoot, if possible, compare images on a monitor or at least a tablet.

Voila, you should now have an understanding of how to use the S or Shutter Speed setting.

All in all, that should have taken you around 15 minutes (not counting any travelling time).

As an aid to this I have a simple checklist for you to download.

Just pop your name and email in the box below and it will magically appear in your inbox.

Compare the shots to see the differences and then play around with different focal lengths and shutter speeds.