The restaurant at Main Camp, run down or not was excellent value for money. Waiters in white tuxedos with gleaming teeth and pens poised ready to take orders were at our beck and call. This was not five star but it had the sort of character that only Africa has. A sort of colonial outdoor setting with smells of fresh cooking, candlelit tables and a quiet hubbub of guests enjoying the experience. Occasionally we would here the roar of a lion or the laugh of a hyena. This was so good that we could forgive the preoccupation black African waiters have with whisking your empty plate away almost at the same time as the cutlery hits the empty porcelain. The one thing the Europeans must have instilled in these guys was to ensure that nobody sat at a restaurant table with an empty plate or cup in front of them. “Never mind carrying out maintenance on rail carriages, lodges, roads or even vehicles just make sure there’s no empties left on the table!”

Trouble is this obsession is starting to spread. Even in Australia young waiters are doing the same thing. What happened to being allowed to leisurely play with your spoon in an empty cup or at least wait until other diners at your table had finished?

Sinamatella camp is 120 kilometres away, two thirds of which is a sealed road but at least a third of that is the usual tar between the potholes. In fact the unsealed section was a lot better than the majority of the sealed section. We decided to take our time and maybe have a game drive at the same time. Initially the animals seemed to be their usual shy selves; then at a waterhole we spotted two leopards, a male and female. The female was nervous and disappeared pretty smartly. The male on the other hand was totally unfazed and nonchalantly crossed the road in front of us, even having the gall to stop and look at us before disappearing into the scrub. At the next waterhole we spotted six elephants in convoys of three. From then on we seemed to see something new at every waterhole. The next 50 kilometres was spent concentrating on avoiding the potholes, so for all we knew there could have been a pride of lions nearby and we wouldn’t have known.

The pièce de résistance came at Modava dam 14 kilometres from Sinamatella. There were three or four hippo standing out of the water, which is rare to see especially during the middle of the day, followed shortly after by two white rhino coming down to the water for a drink. A South African couple in the hide told us these two had apparently only just been released into Hwange from Matobo. This retired South African couple were driving around Southern Africa having a great time with their Landcruiser and camping gear. What a way to spend your retirement!

Sinamatella itself is a lot smaller than main camp and is spectacularly sited on top of an outcrop or mesa (flat topped hill) with 180 degree views for as far as you can see. The restaurant and chalets all back onto a great view of the lower flats and the Sinamatella River where from time to time a distant elephant or giraffe would stop and chew the low thorny scrub. It was a lot drier here so there was fewer waterholes and pans for the animals, making game harder to spot.

As at main camp they conduct guided walks. This time we were the only takers and Ndlovu, our guide, set up a good pace as we set off down the face of the hill. Ndlovu was short on words in comparison to Douglas but there was no doubting his eyes. He spotted a baby giraffe close by and took us as close as he could to an elephant that, as always, was munching away. Elephants spend most of their waking time munching and are also the vandals of the African wildlife social chain. Everywhere they go they leave a trail of destruction as they tear of branches and knock down trees with their powerful trunks and tusks.

The restaurant at Sinamatella was called the Elephant and Dassie and was equally as good as the Waterbuck at Main camp. Here though we had quite a number of uninvited guests looking for a free feed, honey badgers. Honey badgers are small mammals that resemble the badger in size, shape, and habits, but apparently are a lot more aggressive and like eating honey as well as bees and animal flesh. These things scurry around the restaurant looking for scraps and then up and over the lodges at night as the pitter patter of their feet awoke us from time to time. 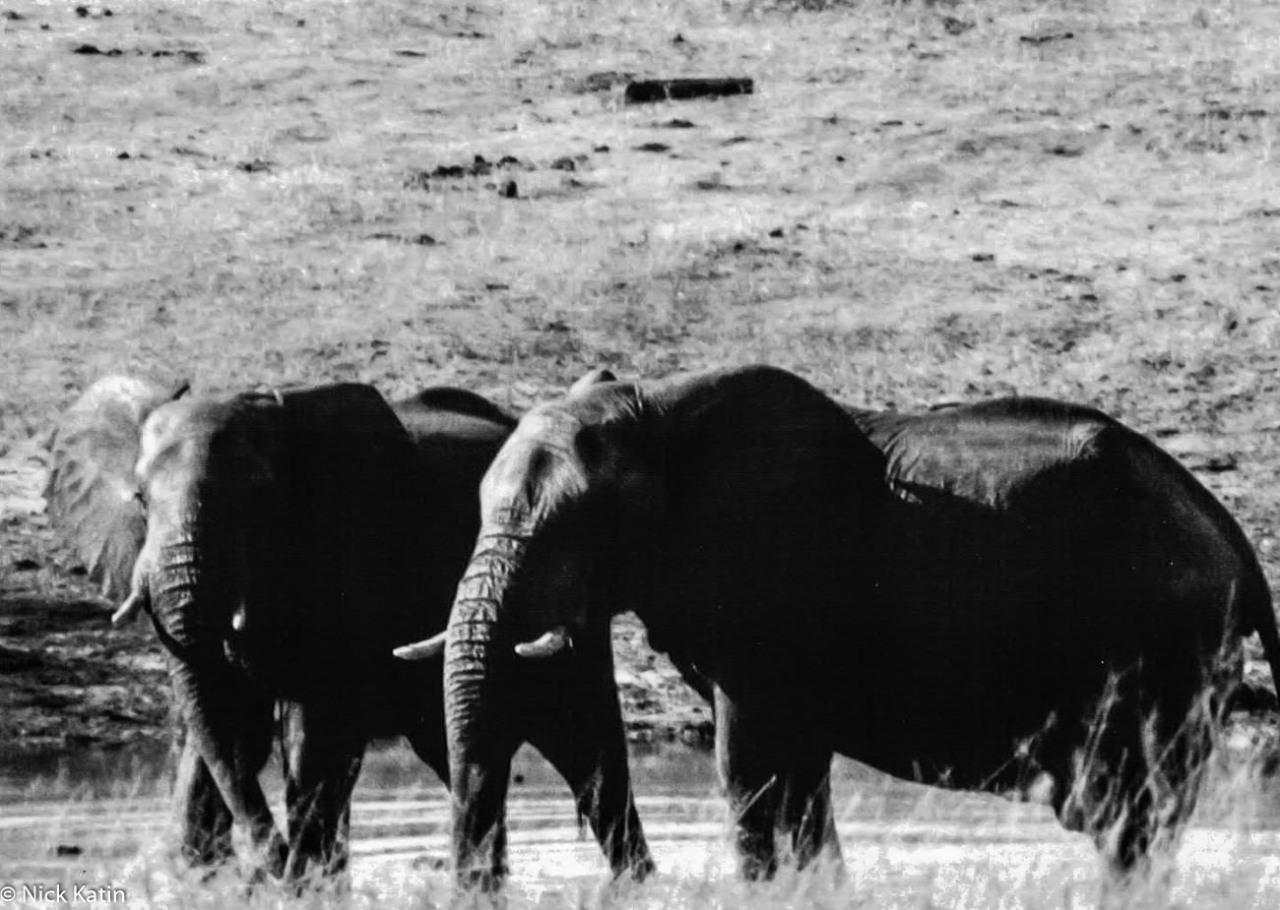 Elephants in Hwange NP in Zimbabwe