Strangely enough the train actually got into Windhoek at 6.15 am, on time!
We had managed to sleep a little despite the noise and the fact that my seat leaned to one side and changed on its own accord from recline to upright once in a while.
That’s the thing about Africa the colonialists had put in all this infrastructure and then pulled out leaving the Africans to maintain it. With few exceptions, Africans are not big on maintenance, so the little jobs are just left until it actually it becomes bigger & then bigger again and a full-scale breakdown occurs.

We had managed to book a room in the Cardboard Box; a backpackers hostel a couple of kilometres walk from the station. Now it was time to test out these backpacks. With the big ones on our back and the daypacks on our front and feeling like a couple of packhorses, we trudged in the general direction of our destination.
There were several times in the course of our travels that I wondered what we were doing. And this was one!

Here we were walking along early in the morning in a strange town with our wardrobes on our back, through who knows what kind of district and being continual ‘honked’ by eager taxi drivers to stay with people younger than our own kids.

We could be in our comfortable home having breakfast on the patio, or better still asleep in our four star hotel provided for us by Abercrombie & Kent or another equally famous and expensive Tour Company.

The Cardboard box was open but its ‘reception’ was closed when we got there.
We dropped our packs and slumped into the usual overused ready to throw out couches and waited.

This turned out to be the friendliest hostel we had stayed in so far.
Owned by a couple of local white guys it was run by two girls, Irene & Louise. Irene was Irish and Louise was English and like most of the people who run these places they came here travelling and ended up staying a while.
The hostel also had a their own travel agent with plenty of info on tours, local attractions and adjoining countries like Botswana, which is where we were headed next. These guys turned out to be pretty handy in organising our next few weeks.

At home we had we had worked out how we were going to get as far as Windhoek by public transport but had drawn a blank from there to anywhere else in Namibia and then on to Botswana and Zimbabwe. It had become obvious to us that for us to see what we wanted to see in Namibia and then to go to Botswana we would have to either hire a car or join a tour or overlander.

We ended up doing both.

Regular backpacker tours run from Windhoek to the Okavango Delta and Chobe National Park in Botswana and then drop you off in Livingstone, Zambia, which is right next to Victoria Falls in Zimbabwe. We didn’t book that right away as we hoped we could find a cheaper tour that maybe spent a bit more time in Botswana but we now knew it was there.

The next thing we did was get Cardboard Box to organise a cheap hire car and some camping gear whilst we trundled off into the city to organise the next 3 weeks in Namibia. 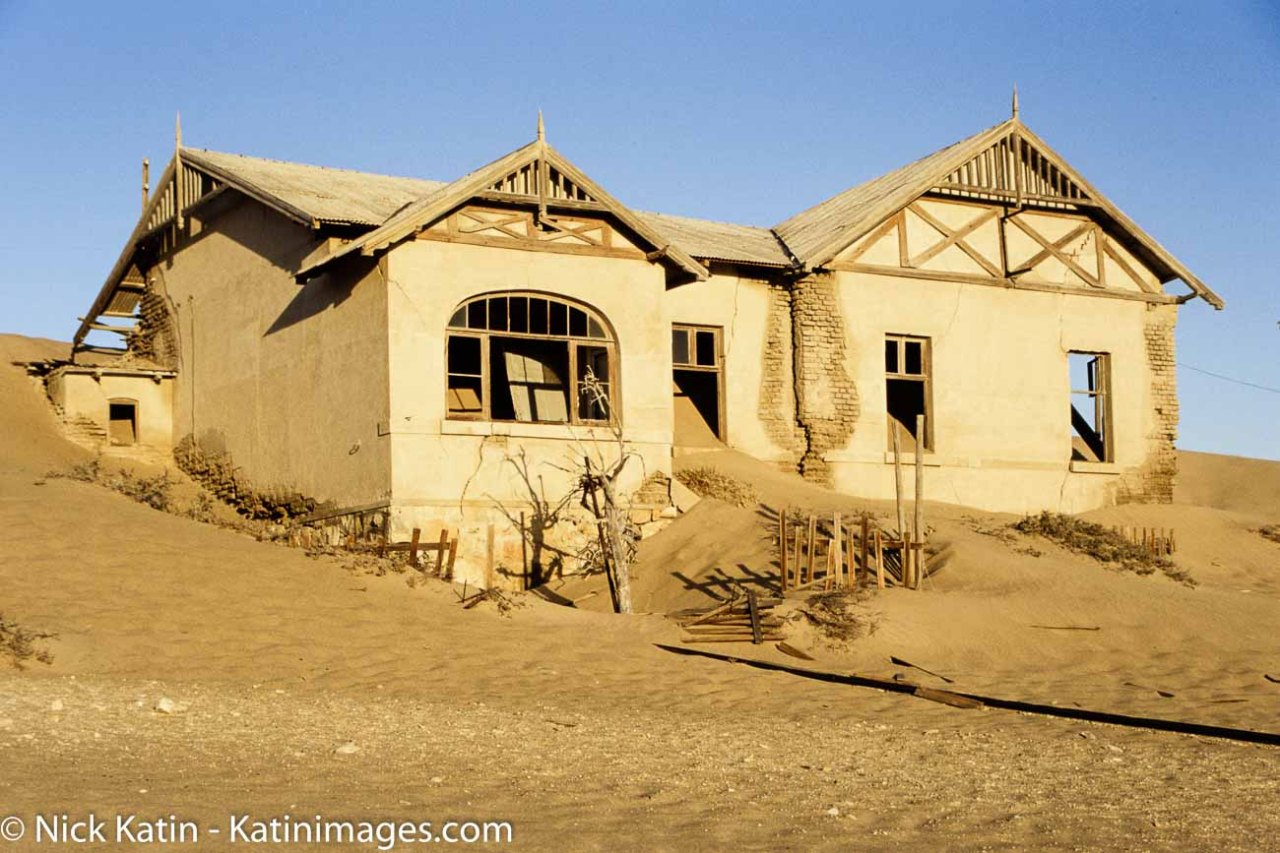 The ruins of the ghost town of Kolmanskop in the Namib desert in southern Namibia, a few kilometres inland from the port town of Lüderitz