We got to the Bronte at 5.00 am the next morning ready and waiting for our guide Peter and his offsider Greg who both turned up at 6.00 am with a driver Showee.
We were heading for Chirundu some seven hours drive away via Breakfast at Chinhoyi and picking up the final two other members of our group at Makuti, Peter and Susan. They were Aussies as well, like us travelling on a tight budget and (shock horror) were about our vintage.

Chirundu is a small town set on the river and serves as a border post with Zambia. It’s here that the real business begins.

A leisurely lunch was followed by a lesson on Canoeing and some tips about animal behaviour. This last topic made us all sit up and listen. “Iiif you are feced with hippo, den puddle towards shallow water und keep you distance. Iiif a hippo charges und turns oover de canooo den geet into anoother”.

I noticed that Peter (the Aussie) had some bad scratches on his legs and arms. “Oh that. We were charged by a hippo in Matusadona and I jumped into a very thorny bush” he said.

This was getting worse!

Now it was time to get on the water. The canoes were twenty-foot Canadian style (whatever that meant) and we climbed in after all our bags and supplies were loaded into the middle of the canoe. If this baby turned over not only would we get wet but so would all our belongings.

That afternoon we covered 16 kilometres and it felt like 100! I had the rear seat so the art of steering was all mine to conquer and needless to say our progress was a series of zig zags along the fast flowing water.

This part of the Zambezi is around 800 kilometres downstream of Victoria Falls and 140 kilometres from the eastern edge of Lake Kariba and the infamous Kariba Dam. I say infamous because when it was built in the 1950’s, nature (in the form of the god Nyaminyami according to the local Tonga tribe) did its damnedest to destroy the project with three unprecedented floods and a heat wave causing the deaths of many workers and severe damage to the work in progress.

The river was wide with the seemingly uninhabited terrain of mountains and hills of Zambia on the north side and the steep riverbanks dotted with hunting camps of Zimbabwe on the south. In between both banks, islands of marshy wet lands split the river creating tranquil channels with lush grasses and lily like growth. With the current flowing with us it all seemed very easy at the beginning. But it didn’t take long to realise that I needed to get the hang of this steering quick smart to avoid the hippos that seemed to be lurking around every corner and the odd croc that lay patiently at the water’s edge.

By the time we reached our destination a small sandy island a couple of hundred metres from the Zimbabwe side, we were ready to rest.
As with the rest of trip there are no washing or toilet facilities here. A spade with a toilet roll at the water’s edge is as good as it gets.
After we erected our tents around the dining table and the fireplace, Peter and Greg presented a feast fit for kings.
Amazingly we had steak and fresh vegetables washed down with the local Myuku red.
Add that to the good conversation and the odd snort of a hippo and roar of a lion and I felt like we were in paradise.

Not so Sue.
Her arms ached from the paddling, she was also concerned as to whether she could paddle the 38 kilometres the next day and she felt really worried about the hippos.
We later attributed the latter to the malaria tablets, Lariam that we taking. One of its side effects is anxiety and as you can see there was plenty to get anxious about.

If Sue was worried about hippos the day before then the morning doubled her fear. Soon after we set off we rounded the bend and the channel narrowed.
Suddenly out from the tall grass on the left bank, rushed a huge hippo straight into the water towards the opposite bank.
Steering and stopping a two berth canoe was still beyond Peter’s and my capabilities as first our canoe, then Peter and Susan’s jackknifed into the bank. We both came to a halt facing back the way we had just come, a few metres from where the guides were waiting patiently in their canoe.
Peter (the guide) opened his hand, drew it down his face and took a deep breath. “OK” he said, “You can’t turn around here so you’ll both have to go back and turn around keeping as close as you can to this bank”

Peter and Sue set off first and successful negotiated the turn. We (well actually me) didn’t do so well. We ended up with such a huge turning circle that before we knew it we were heading directly for the spot in the water where the hippo had last been sighted. There was nothing we could do except, as I yelled to Sue

Which is exactly what we did as the canoe passed right over the top of the hippo as the others watching in amazement or was it amusement. 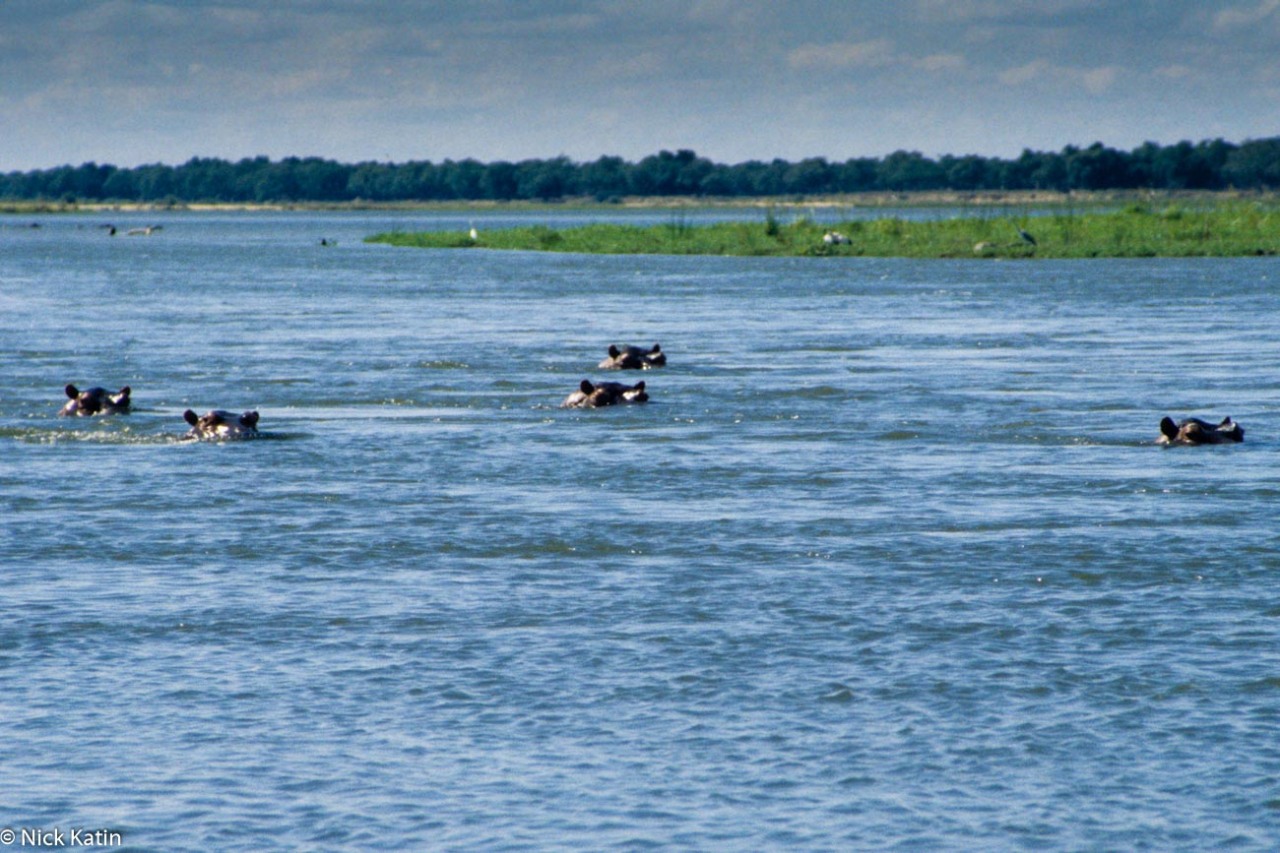 Hippos in the Zambezi River watching canoes in Zimbabwe