Our actual room was part of a block of four away from the house and quite tidy although as in most things in this country a bit run down. We made ourselves comfy and then getting a lift from Louise headed out to the centre of town to hunt down a cheap hire car and book our accommodation at our next destination, Hwange National Park. To book this accommodation (which by the way is almost mandatory) we had to go to the National Parks Booking Agency in Bulawayo. The main booking office is in Harare and they are not connected by any sort of technology except an unreliable fax. Consequently, we had to request certain dates and places and come back the next day to see if we had won lotto after they faxed head office to check availability.

We almost got what we asked for……………. There are two camps in Hwange, Main Camp and Sinamatella and we asked for two nights at Main and one at Sinamatella. What we got was one at each with a night’s gap between the two. We weren’t particularly worried as we had heard that there are lots of no-shows (no deposit is required with the booking) so we had good chance of plugging that gap.

The hire car we managed to get was a Nissan Sunny that had seen better days. A few chips on the paintwork, a couple of small dents, an interior of heavily worn upholstery and a windscreen with a huge crack across the passenger side gave this car ‘character’ and it was also the best of a bad bunch at the price we wanted to pay. We hired it for ten days to travel around Zimbabwe and drop it back in Harare.

We were rapidly getting the idea that maintenance was a dirty word in Zimbabwe everything seemed in need of repair or simple maintenance. Apparently its been a slow almost unnoticeable deterioration that has been going on since 1980 the year of independence, even though for a time in the eighties Zimbabwe enjoyed a prosperity unequalled at that time on the African continent. So we were sort of hoping that this car had been maintained sometime in its long life.

The centre of Bulawayo wasn’t quite as run down as other parts but didn’t particularly excite us. It’s just a functional town, its wide streets built around a grid system full of unexciting functional buildings. Even the museum didn’t enthuse us. It just seemed a well ordered assembly of rooms that housed hundreds of stuffed animals.

What Bulawayo did have was Haefelis!……… Located on Fife Street, Haefelis was a little gem of a café that served cakes, fresh bread, rolls, coffee and pizza. This was the local trendy hangout and a good place to wile away some time, people watching. This was the place of the new Africa or certainly the one the world would like to see if not necessarily some of the African politicians. Young well-dressed Black and White Africans mingled with each other, laughing and joking, putting the world to rights and obviously enjoying each other’s company. Of course in modern day Zimbabwe whites make up less than 1% of the population so their influence should be minimal but still important.

The bigger racial conflict over the years has been the two dominant tribes, the Shona (75%) and the Ndebele (18%). At the end of the ‘bush war’ that lead to independence in the seventies these two groups came close to starting a civil war and now live side by side in an often uneasy atmosphere. As a tourist there is no real evidence of this except the odd incident that gets a mention in the national or local newspapers. Local Europeans who, as in South Africa, tend to dominate the tourism industry and probably have a slightly different perspective than some of the Shona or Ndebele, fed us our information.
We heard quite a few times how simple the majority of the population were and how difficult it was for the farmers or other local employers to get consistent productive work from their employees. If that’s true then as more whites and consequently valuable skills leave the country then the bigger the hole Zimbabwe will find itself in unless it takes steps to educate and teach its population the skills necessary to prosper.
Now don’t get me wrong I’m not in favour of turning all these African countries into western societies and I’m fully aware that everybody was doing just fine until Europeans came along and tried to ‘civilise’ the various African tribes. But the damage is done and the clock only goes in one direction so westernisation is all we have got until someone comes up with something better, which I might add there must be, after all a society that’s produced McDonalds, Emnem, bell bottoms and Ronald Reagan can only be improved on. 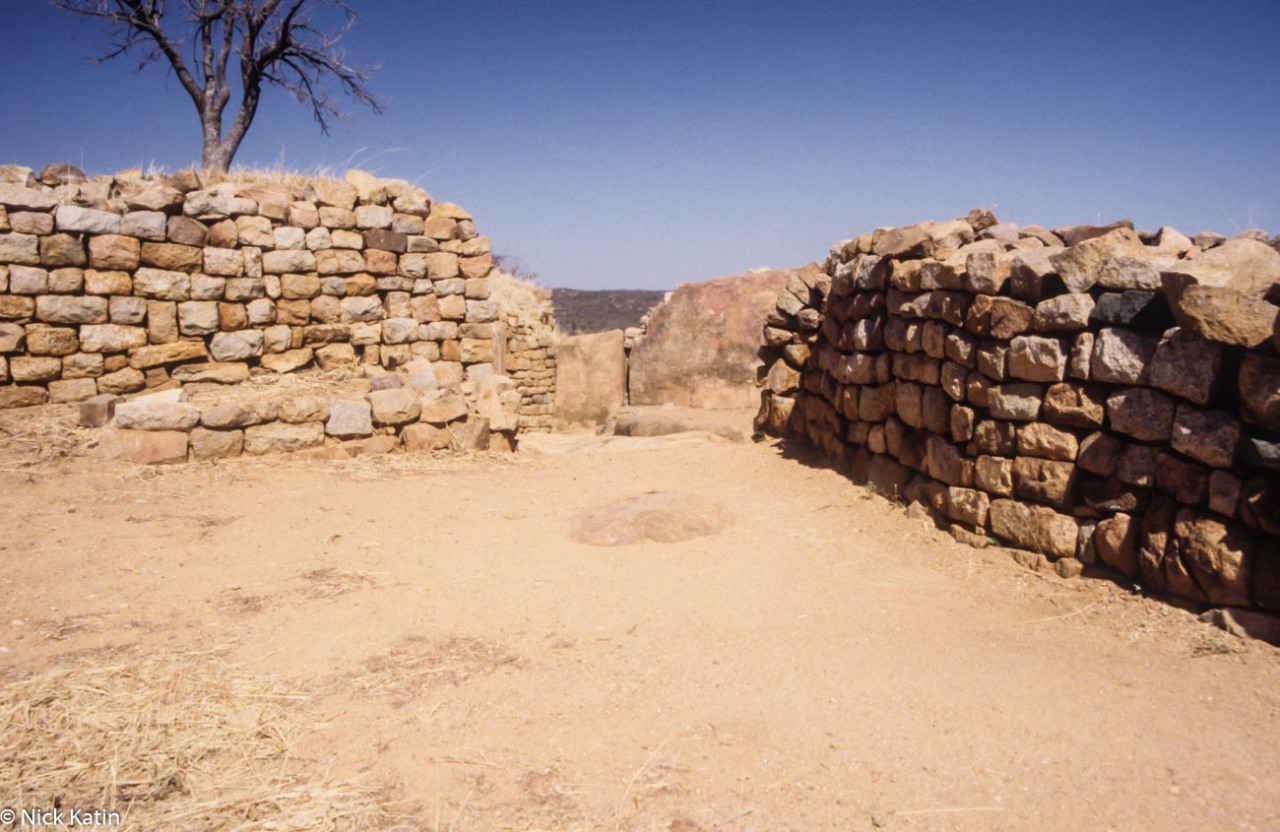 Khiami Ruins near Bulawayo in Zimbabwe