We left Livingstone via the hostel shuttle that was masquerading as the back of a Ute and into Zimbabwe the next morning. The driver actually stopped at the border and took in our passports to the Zambian immigration office for stamping which was a bit disconcerting as a passport is considered the only thing that you should never let out of your possession. But he looked like a trustworthy soul and from the couple of grunts he had given us, he had this air of knowing what he was doing.

A good thing about the backpacker hostels is their network. At each one you can usually book ahead for the next one and even further ahead. In Victoria Falls we had booked to stay at a place named with obviously a lot of thought, 357 Gibson Road. It was a quite comfortable place run and owned by a Dutch couple Hans (who else?) and Elizabeth, full of Aussie travelers and cheap, which in Vic. Falls is a rarity in this age of mass tourism. There’s always a reason why a place is cheap and 357 Gibson Road was no exception. It was 25-minute walk to the centre of town. Now if you’re staying in Rome, Paris, Sydney or even Perth that’s great. In a small town that’s a long walk.
Fortunately Hans gave us and a couple of other Aussies, Greg and Leann, a lift via the local markets into town. Zimbabwe at that time and in fact as I write is in the process of having its currency nosedive into totally a dark void of worthlessness.
Great if you’re a traveler from almost anywhere but not if you live there. You can almost always tell how much a country has lost confidence in its currency, the good old US$ starts to become the currency of tourism. Zambia had already made that transition, we paid for our accommodation in US$ even though we paid by credit card. As John one of the owners of Fawlty Towers put it “You just can’t rely on the Kwacha (Zambia’s currency) to be the same value tomorrow morning as it is today”. At that time 1500 Kwacha equalled one Aussie dollar or US$0.60. It cost us 8000Kwacha (US$3.00) to travel the 11 kilometre distance from the falls back to Livingstone in a taxi! So in Zimbabwe the A$ was only worth 25 Zimbabwe dollars but we still felt like millionaires in the local markets.

Hans left us to wander around whilst he went about his normal business of purchasing his weekly supplies. These markets weren’t the usual stalls and stands but a dusty, rambling and poorly maintained open-air shopping centre.  There wasn’t a lot to look at except hairdressers. Every second shop seemed to be a hairdresser or a bitsa shop. You know one of those shops that sell a bit of this, that and anything else. It was at one of these shops that we all decided to stop and have Z$5.00 (US$0.12) cokes. We actually hadn’t planned to stop but we had to stay there until we had finished drinking so we could hand back the empties. Coke in most of these countries comes in the old coke bottles that have probably been around since it first came on the market early in the twentieth century. What worried me is whether the coke we drinking is that old as well!

As we drank at this rather poor excuse for a milk bar, we did the usual story swapping that travelers do. It turned out Greg was from Perth and had just hitchhiked from Mozambique and somehow got caught up with a drunken driver who stopped at every bar on the 500 kilometre journey. Mozambique is apparently not the sort of place you walk away from a lift unless you have a few months to spare or worse still a gun! This story was to have a lot more relevance to us later on than we realised at the time.

In the 4 years since we first visited Vic Falls it had changed a fair bit. Like any tourist town it always had its fair share of hotels and shops, now it had even more and a lot of them were more upmarket. It had even acquired the obligatory casino.

One place that hadn’t been touched was an area nicknamed curio row. It’s here that you will find almost any type of African curio but in particular rhinos, hippos, African figures and any other shape considered popular, all carved from soapstone or wood. The trouble is there are so many of them that it’s hard to be convinced that guy selling them from his stall (often a just a chair in a small section of a crowded car park) actually made them himself or represents his local village. Somehow I get the impression that it all comes from a huge factory secretly hidden away in the bush. But I guess for these people all that matters is that they sell.

And they do!…………. Tourists gobble them up and take them home and pepper them all round their home or put them aside and forget about them. In these times of globalisation you can find most of these goods in specialty shops in any big western city but usually at four or five times the price. So sometimes it’s often the price and the perception of negotiating a bargain with the seller, that attracts tourists rather than the quality or its origin. We as ‘discerning’ buyers found a small shopping centre around the back of the curio row and bought what we considered more original and quality goods (albeit at higher prices and no option to bargain) than what was on offer elsewhere. 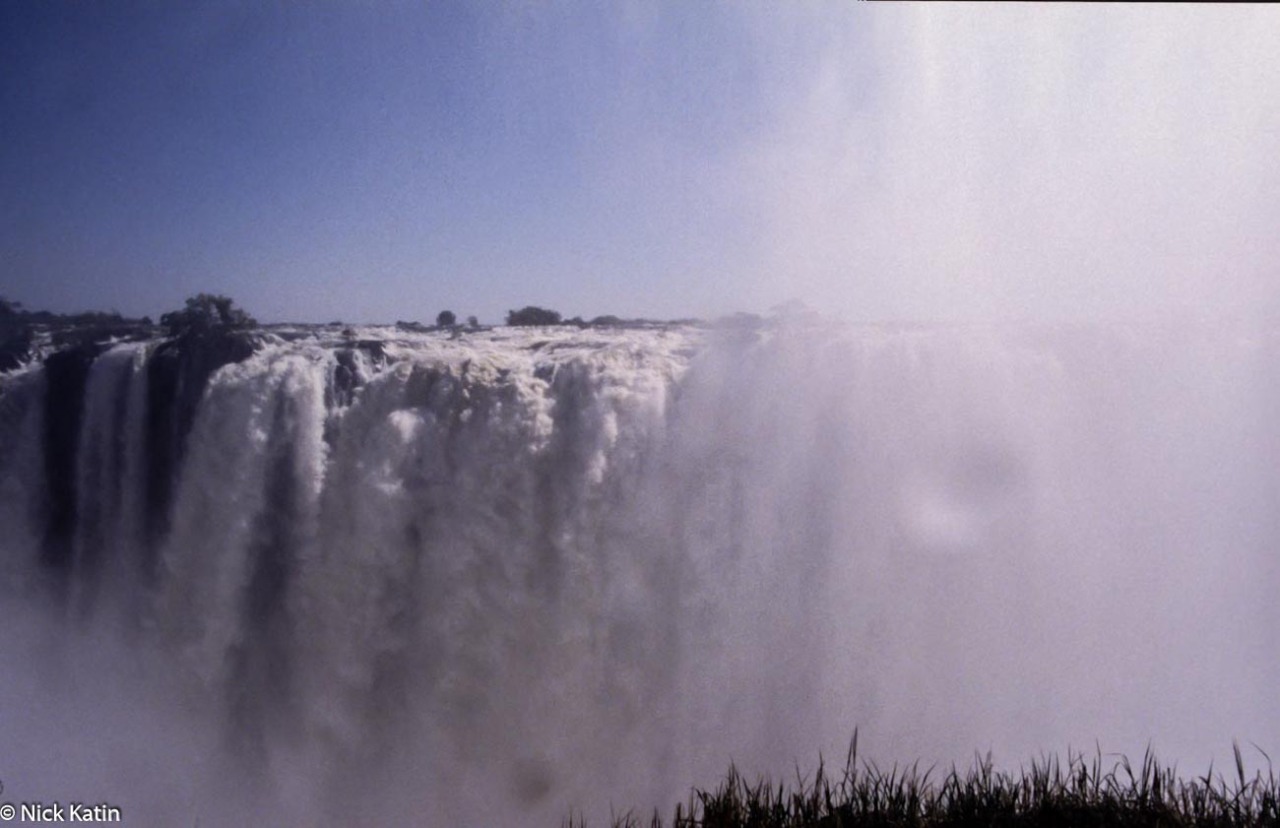 Victoria Falls from the Zambia side