Audi had arranged a local tour guide to take us on a game drive into Chobe that afternoon and then a game cruise along the Chobe River the next morning. Our new tour guide didn’t show for a while and in his absence, led by yours truly, we organised with the agents at Tebe camp, where we were staying, to swap the two tours around. After all, watching the sun go down on the water from a boat surrounded by animals sounded much more romantic than being stuck in a vehicle. Not too mention that early morning is a better time to go for a game drive.

Andre had now left us and returned back to Ngepi. He had done all right for his first time; nothing had been too much trouble and had often bent over backwards to make us comfortable. Humble that he was he was also a nice guy with it. The poor bloke was also just a little bit emotional when he left.

Our new guide was a different animal!

Chris was an Ethiopian brought up in Sweden (we actually thought that he was bullshitting when he told us that but we found out much later that it was true). With his long platted Bob Marley look alike hair and a fairly relaxed and casual attitude to his job; he was also an ‘expert’. Now I know he’s meant to be an expert certainly as a tour guide but I mean he knew it all and there was no doubting that the most important thing in his life was whatever worked for Chris. Which is why he was not too happy that we had rearranged the schedule. But we held fast despite his efforts to convince us otherwise.

The cruise was pretty bloody good!

From the boat we could see elephants and buffalo on the shore and hippos in the water, watching us with those beady eyes that live just above the surface, not to mention the abundant bird life.

The most impressive sight, though, was the sunset that seemed to happen just at the river edge. At home, in Perth, we get some pretty awesome sunsets over the ocean so when I say the Chobe sunset was pretty bloody good; I mean it ‘was’ pretty bloody good. I shot off a few shots after Sue had made the suggestion. One of these shots sits proudly on our dining room wall and when anyone remarks on it, Sue turns to me and says with great satisfaction “and you never wanted to take it!”

Driving through Chobe early the next morning was a totally different affair. Safari trucks are open in the back and at 5.45 am it was bloody freezing. Obviously the animals thought so as well because none of them were anywhere to be seen. We drove around for around an hour along dusty sandy tracks with Chris barking instructions to the driver up front and scratching his head as to why we hadn’t seen anything yet. The night before despite our rearrangement of the final leg of the tour, he had promised us an abundance of wildlife and so far his promise seemed to be pretty empty. Two lionesses saved his embarrassment. They were chasing a squealing warthog 100 metres away across a water channel. We stopped and watched as the two got closer to their prey that was running at great speed first one way then another. I turned to look behind us and to my amazement saw another interested onlooker, another lioness, a mere five metres away peering around our vehicle in effort to see what her mates were up to. We had unknowingly parked right in front of her!

After that the wildlife just kept coming! It was as if someone had sounded the wake up call because everywhere we went we saw something. A herd of buffalo chewing and nonchalantly looking at us quizzically, two hippos wondering around on the river bank, kudu and impala springing away as we neared.

Back to the water channel and we just caught sight of two of the lionesses walking away into the bush. We drove on back towards to the park gates and our campsite and then suddenly around the next bend, as surprised as us, were all three lionesses walking across the track and within spitting distance of the truck.

More buffalo and a crocodile were spotted near the waters edge and then reluctantly our time was up.

Chris was crowing. “See, I said we would see lots this morning” he said in his sort of British, Swedish and African accent. My remainder that it was actually our idea to do this early morning game drive was totally ignored as he continued to crow all the way back to camp. 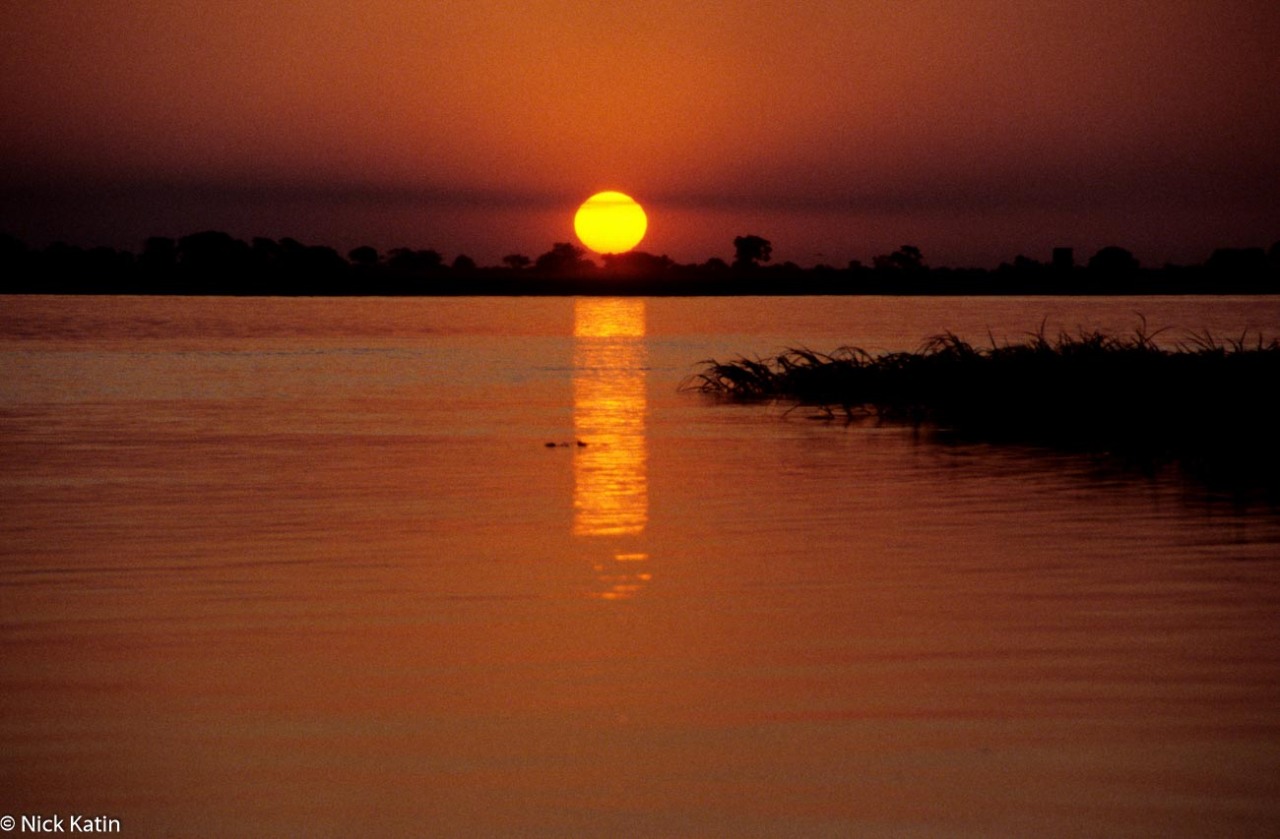 Sunset on the Chove River in Chobe National Park, Botswana