Hentiesbaai is another fishing spot but it does have a sort of quaint character, (compared to Terrace Bay everything has character) with a decent looking beach and some ‘beachy’ looking houses with palm trees and lots of liquor shops. Hennie found us a cheap apartment next to his garage and the shopping centre.

We had the luxury of a TV in this place and as it seemed like years since we had watched any, we just crashed in front of it.

It was cable TV too except there was nothing much on. Most of it came from South Africa and watching South African TV is most disconcerting. They have this habit of changing languages continuously. We were watching their rugby equivalent of the footy show when the interviewer began to interview a rugby player in English. Problem was we could understand the interviewer’s questions but didn’t have a clue as to how the player answered as he was speaking in Afrikaans. Weird!

Cape Cross is smelly. Not just a bit smelly but it stinks. The 100,000 Cape fur seals that call this home really know how to put visitors off. I’ve never seen so many seals! Big ones, little ones, dark ones and grey ones, old and young, male and female, some on the rocks or beach sunbaking, others in the water. Just a huge mass of blubber and seal shit! The Cape fur Seal is distinguished from other seals by the fact it has ears (with all the noise they were making I think they would be better off without them!). They are only found on the West Coast of Southern Africa, as they don’t migrate as a rule. They are quite big in size, the average male weighs around 187 kg but increases its weight to as much as 360 kg at the beginning of the breeding season due to the accumulation of food reserves in the form of blubber. It was for this reason that there are warning signs everywhere not to disturb the seals and cause them to stampede. These huge males can easily crush a small ten kg pup and it’s one of the main causes of the 27% mortality rate.

Cape Cross itself was named after the cross that the Portuguese Diego Cao, the first European to set foot on the coast of Namibia, erected in honour of the Portuguese king. The original cross is actually in the Berlin museum but there are a couple of replicas erected in the same spot.

This weird Namibian coastal climate played tricks with us all day. When we left Hentiesbaai in the morning and headed north it was really hot but as soon as we got we got to Cape Cross it cooled down about fifteen degrees. Driving back down through Hentiesbaai it was hot again and then as we approached Swakopmund (or Swako as it’s known by the locals) it cooled right down again

Swako is a bigger more up market version of Luderitz. It’s a mixture of German, Western and African culture forced together onto the cold Atlantic and carved out of the desert. Its flat featureless topography has been brightened up by some colourful buildings and lots of German Bakerae’s and Bearhaus (bakeries and pubs) on almost every street. Along the promenade there’s these huge date palms on either side of the walkway with houses of varying colours and beach architecture sandwiched between the palms and the beach. German architecturally historic buildings were dotted along most streets in between the many restaurants and trendy curio shops. It felt good to back in western culture for a time. We didn’t camp here either. Why camp when you can stay for in a small, well equipped and centrally positioned self contained unit for N$100 (US$10) per night. Yup! We were going to like ‘Swako’! 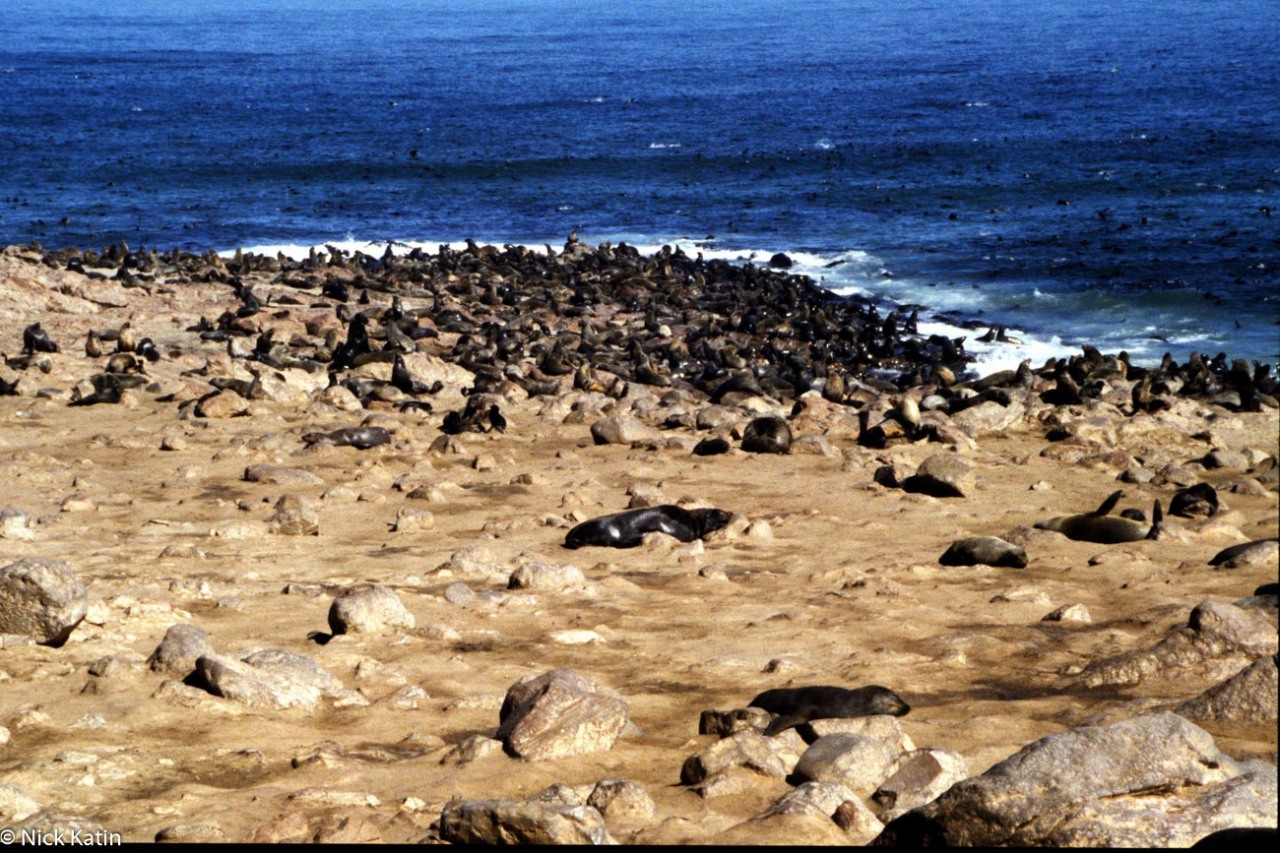 Cape Cross in Namibia is a colony of Cape Fur Seals