Our destination was the Bernabe de la Bat Resort in the Waterberg Plateau Park  (which sounds a lot more romantic than it is) some 300 kilometres south. We planned to see a couple of sights on the way, Lake Otijikoto and the Hobo Meteorite. Lake Otijikioto is one of the only two natural lakes in Namibia.
This important fact didn’t really make it any more interesting. It’s just a collapsed limestone cavern that later filled with water and the only things of interest was its aqua blue colour and the fact that at its deepest (estimated to be 55 metres) lived some rusting ammunition and artillery. In 1915 the Germans were retreating from the South Africans and decided that dumping their weaponry into the lake to prevent those nasty South Africans having it was a master stroke.

At least the lake was just off the main road.
Not so the Hobo Meteorite! According to the Lonely Planet it was about 25 kilometres west of Grootfontein, which was 63 kilometres east of Otavi making it 38 kilometres from Otavi and a 76 kilometre round trip for us as we passed through Otavi.
Easy! Well no, it was not! In fact the turn off, which was extremely hard to find, is a 76 kilometre round trip but the Meteorite itself was a 160 kilometre round trip!
I guess we could have accepted that had this great artifact from the sky been a sight that would change our lives or at least been mildly interesting. It looks just like a rock (its mostly iron) partially buried in the ground with a little bit of landscaping to make it look pretty. Sure there was some interesting information on a board nearby but nothing we couldn’t have looked up on the internet.
“So what did you expect?” I hear. I’m not sure but it was a long way to go for a lump of iron. If it had been green kryponite that glowed and changed colour, or throbbed like something from Star Trek, I would have been happy. But this thing just looked like something that had been found in another part of the country and brought here to make some extra cash and piss tourists like me off!

The Bernabe de la Bat ‘Resort’ is nestled in the shadow of the 50 by 16 kilometre sandstone Waterberg plateau that stands around 150 metres high.
The campsites were sheer luxury, grass. We hadn’t had grass since Daan Viljoen. No dust to find its way into your sleeping bag at night or blow into the tent by day. It was terrific.
We actually spent the afternoon of our only full day there cleaning the dust out of the car. Considering how small it was, it seemed to hold an awful lot of sand.

In Australia a big proportion of retirees, buy a caravan and do the round trip around Australia, sometimes for months, sometimes for years. In South Africa they head North to Zimbabwe, Zambia, Botswana and Namibia. Namibia is generally favourite amongst those from the Cape Town area. Here at Waterberg, we met three couples up from the ‘Cape’ travelling in convey. They were extremely friendly and helpful (even hanging up our washing whilst we were out walking).

Speaking of walking we followed the only decent length walk trail, outside of the couple of long distance trails, in the park to a spot called mountain view at the top of the plateau. It was not a long climb but it gave us a bit of a workout after the day of driving we had the day before. The views at the top were certainly worth it, we could see for miles across the scrubby plains interrupted by the odd decaying sandstone hill but probably the best view was of the plateau rim with its sheer sided red, orange and green rock and vegetation. 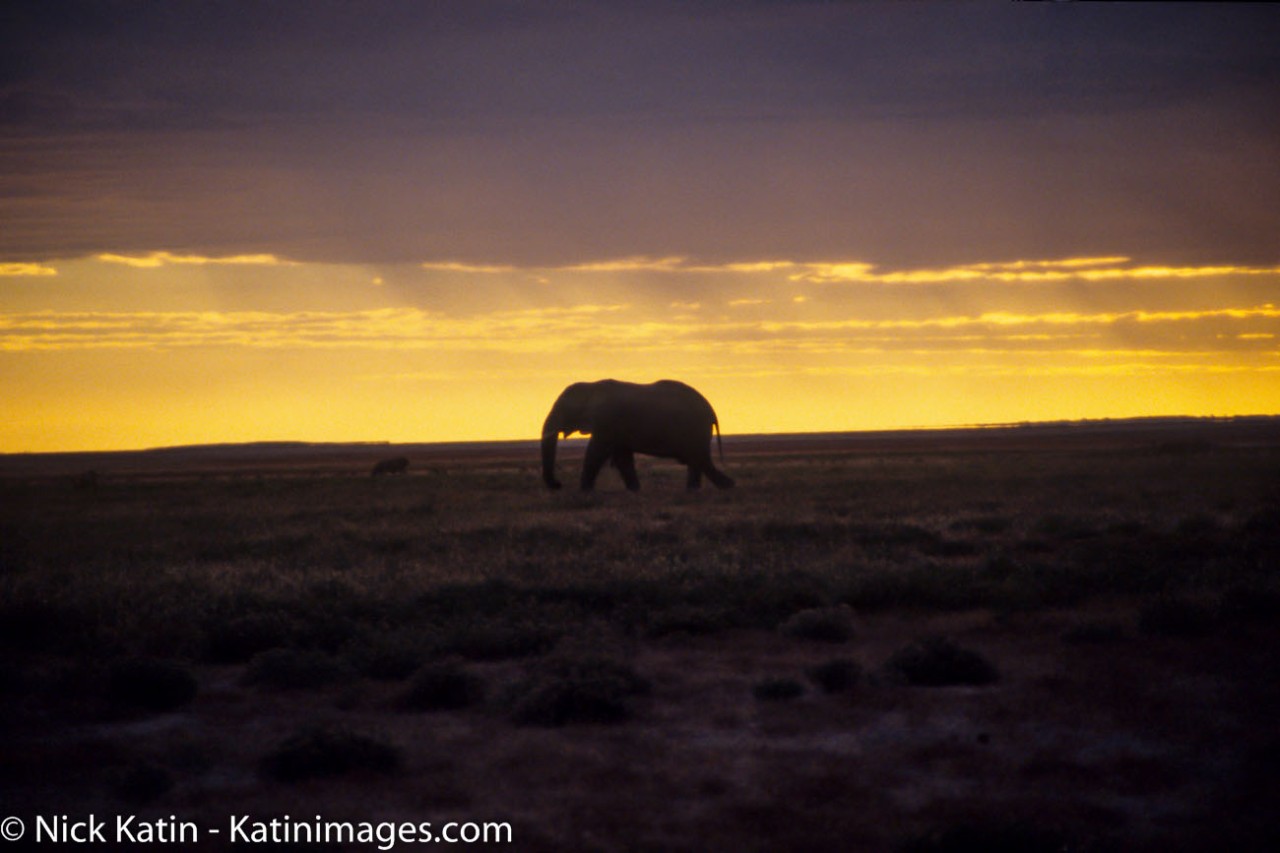 An elephant strolling through the scurb at sunset in Etosha national Park, Namibia