A night drive is a game drive, obviously, in the dark; well it was really in twilight as we set off just before sundown. The idea is to see lots of animals big and small as they cruised around in the coolness of dusk and then stop for a sundowner in the middle of nowhere. As it got darker so our reliance on the two spotlights grew and of course the obvious happened one of them blew. So the ten of us on the drive all had to squint into the dark to spot anything.
We did actually see quite a few animals. But of course we didn’t see any of the more popular ones like lions, cheetah’s etc.

Back at the camp we ate one of Roland’s culinary masterpieces under the light of plastic drink bottle covered candles.
Now was the time for that beer as we got to know each other better.
Simon & Hannah had just left school and were doing a bit of travelling before starting University in England. Alex, was visiting rellies in J’burg and I got the impression that they had shunted her onto this tour to get her out of their hair, she certainly was a little temperamental. Michelle was the quiet one. She had finished her Peace Corp stint in northern South Africa and this was her last days in Africa. Despite her quietness and the fact that she was American she had a great sense of humour. Well I think she did, she laughed at all my jokes.

The tour kept rolling on, our next stop was the camp at Mata Mata, 127 kilometres north on a gravel road. The idea was to take it slow, have brekkie and lunch on the road and do a game drive at the same time.

Cheetahs and lions in the distance, black backed jackals, cape foxes, steenbok, gemsbok, wildebeest, springbok (these last our all from the antelope family) and the quaintly named long legged big bird, kori bustard.

The park was named after the Gemsbok, being quite common in the Kalahari. It’s a big animal at around 1.2 metres tall with striking fawn grey flanks, black legs and tail and metre high pointed horns. In my humble opinion, this is the most beautiful of all the antelope species found in Africa.

The next day was pretty much the same format, as we drove on to Nossob, the last of the three camps, except the little critters must’ve sent out the message via the desert telegraph to hide when ever we came on the scene, because we saw virtually nothing.

Nossob like Mata Mata was more basic than Twee Rivierien, but it did have an animal hide. Once again the animals didn’t read their scripts properly and forgot to come and see us. So we had to gain our entertainment from Roland who was busy being his industrious superhuman self. He was cooking spag bowl and fixing three punctures all at the same time. That night he told us stories of rangers cutting off their limbs to save their own lives after a predator attack in the bush. How he caught tick bite fever and was hospitalised for 9 weeks and how he had just recovered from a bout of Malaria which was really bad that year and had resulted in many deaths in central and eastern parts of South Africa. I think he has the philosophy of “never bugger up a good story for the facts”.

Fortunately he told us these stories after we ate! 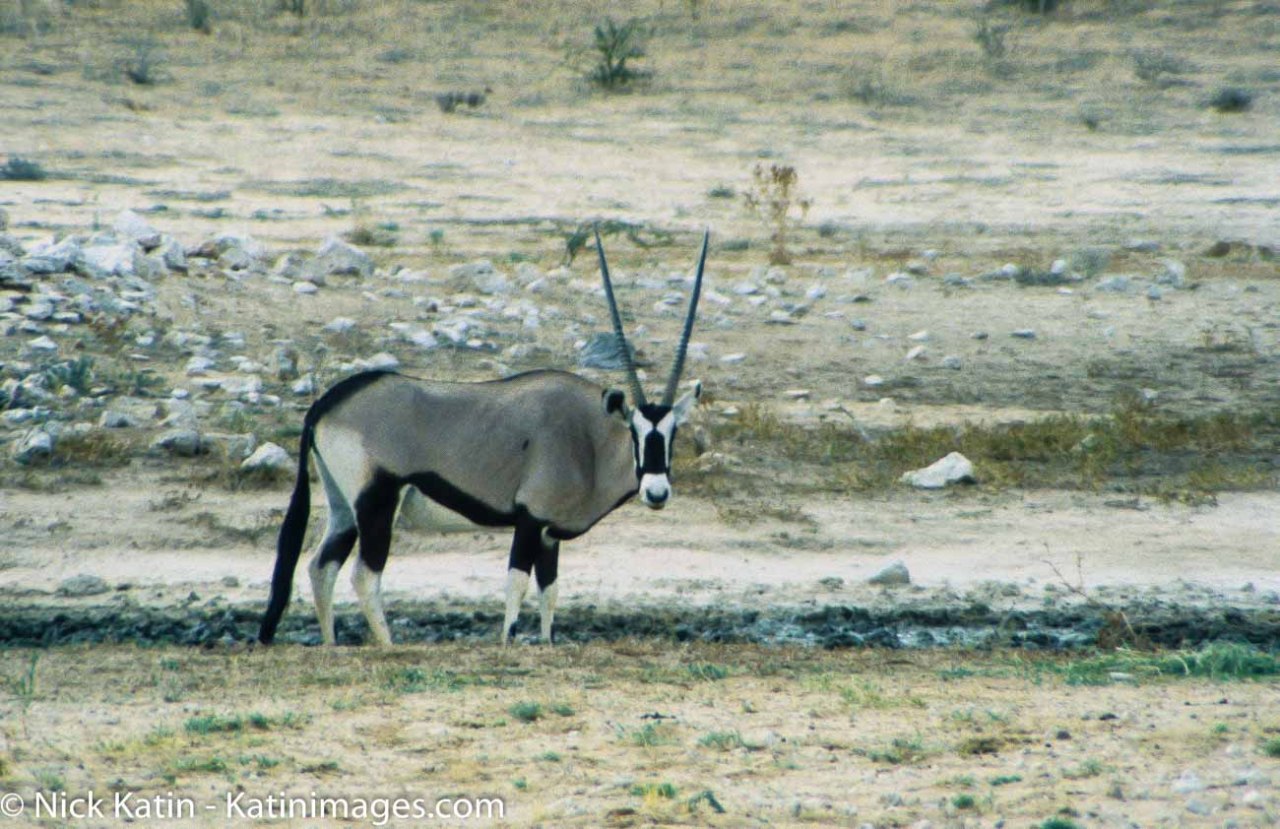 A Gemsbok in the Kalahari national park